Pillow Fight : Throwing Pillow Each Others

Throwing Pillows and Fight each other

Pillow fight is a common game played by most young people (also teenagers and adults). Where they engage in mock physical conflict, using pillows as weapons. A pillow fight can take place almost anywhere but is traditionally played at beds. Sometime, peoples arranging cushion fight festival at the public place. 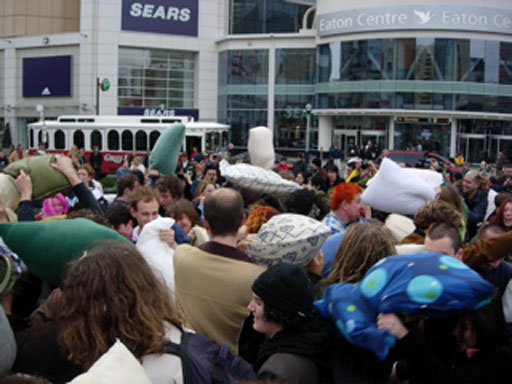 The best methods to start a pillow fight is spontaneously. Make sure there are enough pillows for everyone and then grab a pillow and start whacking your enemy near you. Because the pillow is soft, that’s make rare  injury. The weight of the pillow can still make young people losing balance when hit. Especially on soft surfaces such as sleepovers, which are common places to use.
In earlier eras, Cushion fight will stops after the feathers scattering throughout the room. Modern cushions tend to be stronger and more often filled with solid material from artificial materials than feathers or down, this can be resulting in more frequent damage.

In Japan, Makura-Nage is a game from Japan where kids throw pillows at each other. While war pillows primarily take the form of hitting each other, the Japanese Makura-Nage is a game where players throw each other pillows at the same time. The word “Makura” means “pillow”, “nage” means “throw”.
The fights are a normal part of school trips in Japan. When several students sleep in the same hotel room and start throwing pillows at each other. Known for its “Onsen” (Hot Springs), Ito City in Shizuoka, is the first place in Japan to turn pillow fights into a competitive sport.
This unique event in which competitors can relieve stress by throwing pillows at each other is held to promote Ito Onsen. This competition is different from Western pillow fights, which involve hitting each other with pillows, and is unique to Ito City.
Based on the idea of a student from the local Ito High School Jogasaki branch school. The All-Japan Pillow Fighting Tournament in Ito Onsen is a legitimate sport with rules, involving teams of six to eight people. The number of competition teams has grown from 18 teams (in the first tournament in 2013) to 57. Divided by 48 in General division teams and 9 children’s division teams in this year’s tournament.

Women wrestlers, known as Divas in World Wrestling Entertainment (WWE), engage in pillow fights as a type of match. Most often booked as a Lingerie Pillow Fight, in which the women fight in lingerie outfit. None of actual wrestling takes place on those fight.

In January 2007, Reuters reported that a Pillow Fight League was operating in bars in Toronto. There are pre-selected female fighters whose perform in regular stage with unscripted fights. Although must have a stage personalities, they’ve paid with small amount of money.
The rules call for “No lewd behavior, No moves such as leg drops, tickling or submission holds are allowing. As long as a pillow is use”, Cool!

April 6 was announcing as an important day. The various part of the world celebrates and follow by thousands people. Many massive pillow wars organizes in an effort to break Guinness World Records. But the current record is events among 3,706 Peoples. The show held by the BBC at a “Children in Need” events, in Minehead, Somerset, England in 2008.
According to The Guinness World Records, The largest fight event was set in July 2015 at Saint Paul Baseball Game. Where 6,261 people participating in the pillow fight event which sponsored by the local pillow manufacturer.
See The Pillow Fight Video
Spread the love
cushionfeatherspillow
Couch Pillow : Choosing The Right Formula
The Comprehensive Matters of Pillow Materials